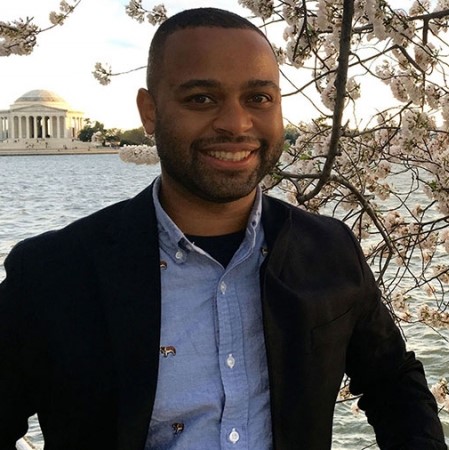 WASHINGTON, January 15, 2021 -- The American Institute of Physics and the National Society of Black Physicists congratulate physicist Thomas A. Searles as the winner of the inaugural Joseph A. Johnson III Award for Excellence.

Named to honor the legacy of the renowned experimental physicist and founder of NSBP,  will be given by AIP and NSBP annually to recognize an early career NSBP physicist who exemplifies Johnson’s ingenuity as a scientist and passion for mentorship and service.

In selecting Searles, the selection committee cited him “for his leadership in growing the participation levels of rising HBCU scholars in cutting-edge quantum research and for establishing a new experimental research program in asymmetric metamaterials at the juxtaposition of physics and materials science.”

“Professor Searles is a gifted and promising experimentalist and mentor. He is an inspirational member of NSBP and exemplifies the spirit of Dr. Joseph Johnson's legacy,” said NSBP president Stephon Alexander. “NSBP is proud to partner with AIP in this well-deserved and prestigious award.”

Growing up in Albany, Georgia, Searles began cultivating an interest in physics in first grade, when he did a book report about Black astronauts. After obtaining a bachelor’s degree in mathematics and physics from Morehouse College, he went on to receive his doctorate from Rice University in applied physics.

During this time, Searles took frequent research trips to the National High Magnetic Field Laboratory, which neighbors the Center for Plasma Science and Technology at Florida Agricultural and Mechanical University, where Johnson was the director.

“It was kind of like a beacon of ‘This is what you’re doing here. You could be this one day,’” he said. “It’s not full circle, but it’s cool that I’m the first person that gets this award.”

Searles, who is currently an associate professor in physics at Howard University, emphasizes the important role mentorship has played throughout his career, particularly through NSBP.

“There’s definitely a two-way street on mentoring, and there’s things I learn from my students all the time,” he said. “One person can make a huge, huge change, and hopefully, the people they affect can then keep it going.”

Seeing his students succeed is the biggest reward to Searles. A few of his most memorable experiences include finding out one of his students won an award for young Black astrophysicists and reconnecting with a particularly impressive former student, now a National Science Foundation fellow.

He said he is continuously working on becoming the best mentor he can be, especially when it comes to encouraging young Black women to see themselves as physicists.

“People identify with who they want to for various reasons. Just getting the word out that this is an option, if we can do that in the next 10 years, I know that will be an extreme change,” said Searles. “I’m always making a point to try to help graduate students, undergrads, high school students, random 8-year-olds on the street with a physics T-shirt on. If I can help anybody to get engaged, I think that’s what I’d like to do.”

From improving representation in the physical sciences to researching quantum computing, Searles is always looking for ways to address challenges that help make the world a better place. Inspiring his students to seek out opportunities is just one way to do that, and Searles is thankful for the recognition he has received.

“It’s a huge honor to be the inaugural Joseph A. Johnson Award winner. It’s extremely special to me,” said Searles. “People like Joseph Johnson were in spaces where they could never imagine the things that I’m able to do because of the things they were able to do.”

“I think it’s a very interesting time to be a young Black physicist.”

Searles considers Johnson to be synonymous with FAMU’s success in physics and hopes he can make a similar mark on Howard. The award money will help his research group publish their most recent paper.

ABOUT THE JOSEPH A. JOHNSON III AWARD FOR EXCELLENCE

Joseph A. Johnson III, of Florida A&M University, was a pioneering and renowned experimental physicist, mentor to many Black doctoral students and a founder of the National Society of Black Physicists. In honor of his iconic legacy, the American Institute of Physics and NSBP have partnered to recognize an NSBP physicist who exemplifies Johnson’s ingenuity as a scientist and passion for mentorship and service. This honor comes with a $5,000 award along with an invitation to give physics department colloquia at partner universities.

Founded in 1977 at Morgan State University, the mission of the National Society of Black Physicists is to promote the professional well-being of African American physicists and physics students within the international scientific community and within society at large. The organization seeks to develop and support efforts to increase opportunities for African Americans in physics and to increase their numbers and visibility of their scientific work. It also seeks to develop activities and programs that highlight and enhance the benefits of the scientific contributions that African American physicists provide for the international community. The society seeks to raise the general knowledge and appreciation of physics in the African American community.

The American Institute of Physics (AIP) is a 501(c)(3) membership corporation of scientific societies. AIP pursues its mission—to advance, promote, and serve the physical sciences for the benefit of humanity—with a unifying voice of strength from diversity. In its role as a federation, AIP advances the success of its Member Societies by providing the means to pool, coordinate, and leverage their diverse expertise and contributions in pursuit of a shared goal of advancing the physical sciences in the research enterprise, in the economy, in education, and in society. In its role as an institute, AIP operates as a center of excellence using policy analysis, social science, and historical research to promote future progress in the physical sciences. See: http://www.aip.org