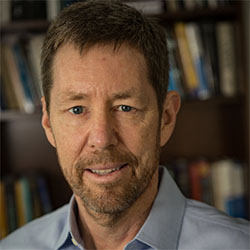 Randall Hulet investigates atoms at temperatures as low as a few nano-Kelvin. At these low temperatures the quantum mechanical wavelengths of the atoms can be as large as 1 micron, greatly altering normal atomic behavior. Hulet and his group have used laser cooling and atom trapping techniques to explore this exotic regime of matter, investigating ultracold atom collisions and quantum statistical effects, such as Bose-Einstein condensation. Collisions between ultracold atoms can reveal the subtle nature of their mutual interaction. Hulet and group use laser spectroscopy to probe these interactions. By this technique they discovered that two 7Li atoms weakly attract each other at very low temperature. Theorists believed that this fact would prevent lithium from undergoing a Bose-Einstein condensation, the paradigm of all quantum statistical phase transitions. In 1995, however, Hulet and his group succeeded in coaxing a gas of magnetically confined 7Li atoms to Bose condense. Subsequent investigation of this novel system has lead to the direct observation of condensate growth and collapse.

Hulet and group later produced the first quantum degenerate Bose/Fermi (7Li / 6Li) mixture of ultracold gases. The size of the fermion atom cloud was stabilized by Fermi pressure, in analogy to a white dwarf or neutron star. More recent investigations have focused on superfluidity of atomic Fermi gases, using Cooper paired 6Li atoms. These pairs are a close analogy to those resulting in superconductivity of some solids. This goal of this work is to better understand the nature of high-temperature superconductors and other strongly correlated materials.

Randall G. Hulet earned a BS degree at Stanford University and a Ph.D. in Physics at MIT.  He was a National Research Council Fellow at the National Institute of Standards and Technology, where he worked on laser cooling of trapped atomic ions. He joined the faculty of Rice University in 1987 and he currently holds the Fayez Sarofim Chair in Natural Sciences. He has received many awards, including the I.I. Rabi Prize of the American Physical Society, the National Science Foundation Presidential Young Investigators Award, a NASA Medal for Exceptional Scientific Achievement, and the Willis E. Lamb Medal for Laser Science and Quantum Optics.  He is a Fellow of the American Physical Society and the American Association for the Advancement of Science, and he is a member of the American Academy of Arts and Sciences.

Hulet is well known for his many important contributions to atomic physics.  He played a leading role in the development of laser cooling and laser trapping of atoms. His most important achievements are the first realization of Bose-Einstein condensation in an atomic gas with attractive interactions, the creation of a degenerate Bose-Fermi mixture, and the observation of antiferromagnetic order in the Fermi-Hubbard model using ultracold atoms.