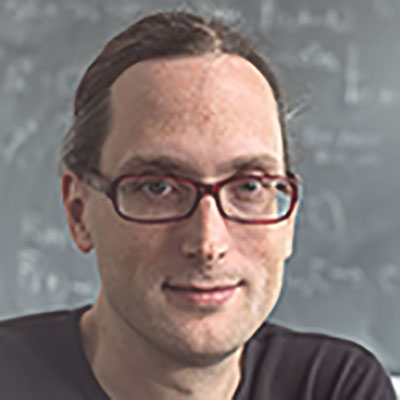 One theme of my research involves the effects of disorder in condensed matter systems. For solid state materials, disorder is ubiquitous and typically unavoidable, taking the form of randomly-distributed impurity atoms, dopants, or structural defects. Perfect crystallinity is an ideal sought by materials growers and taught as the foundation for solid state physics; a concern is that the electronic properties of disordered materials may depend sensitively upon the details of the impurity distribution (which varies from sample to sample). Yet a remarkable and deep feature of quantum mechanics is that disordered systems fall into only ten symmetry classes. Physical properties at low temperatures are largely determined by the class, independent of the details of the disorder, as long as interparticle interactions are sufficiently weak.

Disorder induces complex interference patterns in electronic wavefunctions. These can induce strong effects that dominate low-temperature materials properties, such as insulating behavior due to Anderson localization. For a conducting phase, spatial fluctuations in the electronic local density of states exhibit an intricate structure governed by multifractal statistics. The latter also arise in the characterization of strange attractors and other complex phenomena. In many low-dimensional quantum systems, topology plays a crucial role regulating the influence of disorder. Recent experimental breakthroughs in graphene and 3D topological insulators provide a new theatre for localization physics, because disorder-induced quantum interference occurs along an exposed 2D surface that can be probed locally (e.g. by STM).

Another interest is the combination of electronic inhomogeneity, interparticle interactions, and interaction-mediated collective phenomena such as superconductivity and magnetism. These ingredients arise in strongly correlated materials, in low-dimensional systems like graphene, and also in "synthetic" environments such as ultracold atoms in optical lattices.

I am also interested in dynamics, in particular the far-from-equilibrium evolution of well-isolated many-body systems. Ultracold atoms and ultrafast spectroscopy techniques allow the probing of fully quantum coherent many body dynamics. Goals include shedding light upon the boundary between quantum and (effectively) classical behaviors, and understanding the emergence of dissipation and thermalization in the absence of an external heat bath.