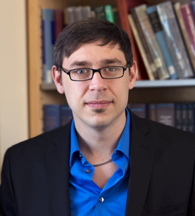 Prof. Hazzard works to develop a theoretical understanding of many-body physics at the locus of ultracold matter and condensed matter physics.  Many of the most important phenomena in modern science involve emergent many-body phenomena, where collections of constituents give rise to behaviors unlike those seen in the constituents themselves. In physics, these constituents are often quantum, such as electrons in solids, photons in optics, or atoms in ultracold matter. When this quantum matter interacts strongly, understanding it can be incredibly difficult. However, comprehending such matter promises to lead to materials that break the shackles of our present frameworks, to realize otherwise-impossible behaviors by driving systems out of equilibrium, and to enable quantum-enhanced devices for sensing, communication, and computation – devices that exceed the performance of any non-quantum technology.

Hazzard’s work mostly focuses on two areas: developing a better theoretical understanding of many-body phenomena in ultracold matter, and working with experimentalists to control and engineer new phenomena and systems. The focus on ultracold matter offers a unique setting in which to engineer and observe quantum many-body systems; two prominent characteristics are the ultracold systems’ being well-controlled and highly tunabl.

Hazzard’s group works closely with experimentalists, and the group employs a diverse range of analytic and numerical theoretical tools. They try to find – or develop – the right tool to approach a problem rather than shoehorn a particular theoretical method to it. This working philosophy has helped experimentalists to pioneer novel systems and approaches for many-body physics, such as ultracold polar molecules, bottom-up engineering of cold atoms in microtraps, and Penning trap ion experiments with hundreds of ions. On the theoretical front, it has led to the discovery of exact analytic solutions of quantum many-body models, development new numerical tools for far-from-equilibrium dynamics, and to a deeper conceptual understanding of many-body physics occurring in ultracold and condensed matter.

Born in Ohio, Hazzard completed his B.S. from The Ohio State University, majoring in physics and math (and taking all of the chemistry minor courses), and then received his Ph.D. in theoretical physics from Cornell University in 2010. He was a postdoc from 2010 to 2014 at JILA/NIST/CU-Boulder, where from 2011-2014 he was a National Academy of Science NRC postdoctoral fellow. In 2014, he joined Rice University as an Assistant Professor.