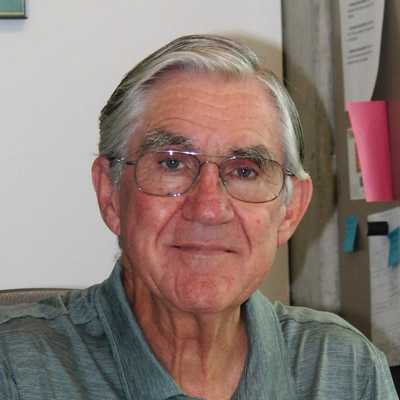 My research focuses on atoms in which one electron is excited to a state of very large principal quantum number n, termed Rydberg atoms. Such atoms possess properties quite unlike those normally associated with atoms in ground or low-lying excited states. For example, because the size of an atom scales as n2, they are physically very large. An atom with n~400 has a diameter approaching 20 μm. Their classical electron orbital periods are also very long, ~10 ns at n~400, and this we exploit to control and manipulate their electronic wave functions using pulsed electric fields whose characteristic times (duration, rise/fall times) are less than this period. Application of such pulses leads to the formation of wave packets that comprise a coherent superposition of adjacent Rydberg states. These wave packets display novel dynamical behavior that can mimic the classical motion of an excited electron, thereby providing a bridge between quantum and classical physics. Our studies show that, with careful choice of the amplitude and width of the pulses (or application of several pulses), it is possible to control and manipulate atomic wavefunctions with remarkable precision. We exploit the use of carefully-tailored sequences of pulses to engineer atomic wavefunctions and produce “designer” atoms to study classical-quantum correspondence, to create non-dispersive wave packets, to probe non-linear dynamics and classical/quantum chaos, to study atom/field interactions in the ultra-fast ultra-intense regime, and to study the behavior of strongly-coupled Rydberg/Rydberg systems. Initial work centered on potassium Rydberg atoms contained in a tightly-collimated atomic beam but has now been extended to include strontium Rydberg atoms contained in both an atomic beam and in an ultra-cold atomic gas or Bose-Einstein condensate (BEC).

The starting point for many of our studies is the production of strongly-polarized quasi-one-dimensional (quasi-1D) high-nRydberg atoms by photo-exciting extreme red-shifted Stark states in the presence of a weak dc field. Protocols have been developed using pulsed electric fields to characterize such states and monitor their time evolution. Techniques have also been devised to convert such states into quasi-two-dimensional (quasi-2D) “circular” states in which the electron orbits in a plane, and probe their evolution. The opportunities afforded by the creation of quasi-1D and -2D atoms are being explored. These include the use of periodic drive fields to create localized non-dispersive wave packets that mimic the behavior of a classical electron and to transport these wave packets to states of higher n. Measurements with strontium Rydberg atoms show that the regime where dipole blockade becomes important can be accessed, even at high n, opening up new opportunities to study strongly-coupled Rydberg atom pairs and their possible manipulation to form long-lived “molecular” species through periodic driving. The production of long-lived “planetary atom” states in strontium that contain two excited electrons is also being examined.

Ultralong-range Rydberg molecules in which the scattering of the Rydberg electron from a neighboring ground state atom binds the two together in a novel chemical bond is being explored. Initial spectroscopic studies have focused on dimer Rydberg molecules. However, measurements have been extended to trimer, tetramer . . . molecular states in which two, three . . . ground-state atoms are bound to the Rydberg atom to examine their lifetimes and the details of their energy level structure. Recent studies of molecule formation in dense BECs, where the Rydberg electron orbit encloses tens to hundreds of ground state atoms, have revealed the formation of ever more complex Rydberg molecules and, at the highest densities, the creation of Rydberg polarons consisting of the Rydberg “impurity” dressed by excitation of the background medium. Such Rydberg polarons differ significantly from those seen in condensed matter systems and offer a new approach to studying many-body Rydberg physics. Rydberg molecule destruction in dense gases is also being explored and results from the interaction of the Rydberg atom core ion with its nearest neighbor ground-state atom. Ultralong-range Rydberg molecule production also provides a valuable tool with which to examine non-local correlations in quantum gases on length scales of ~50 to 200 nm that were previously inaccessible using other techniques.

Measurements undertaken using polarized and unpolarized samples of (fermionic) 87Sr and (bosonic) 84Sr have demonstrated the important role played by quantum statistics in determining the pair correlation function g(2)(R). Rydberg molecule formation can be used to investigate a variety of other physical systems such as resonant atom-atom scattering states or non-local pair correlations in repulsively-interacting one-dimensional Bose gases. The protocols developed to manipulate atomic Rydberg states can be tested on Rydberg molecules to determine how the molecular structure influences their outcome and processes such as dephasing and decoherence of the product wavepackets.

Each of the above experimental programs makes use of advanced experimental techniques including ultrahigh vacuum technology, state-of-the-art dye and diode laser systems, high-speed analog and digital electronics, and computer-based data acquisition and control systems. The work relies heavily on the efforts of several graduate and undergraduate students:

Barry Dunning operates a research program exploring the physics of atoms in highly-excited Rydberg states. While continuing to investigate the fundamental physical properties of these giant atoms, his group is also now using Rydberg atoms as a nanoscale laboratory in which to examine the manipulation and control of atomic wavefunctions, i.e., atomic engineering, and classical-quantum correspondence. Work using strontium Rydberg atoms is pushing towards formation of long-lived two-electron-excited “planetary atoms” whose behavior mimics that of a planetary system and the creation of Rydberg “molecules” comprising two neighboring Rydberg atoms. Dense ultra-cold gases are also being used to probe the formation of novel ultralong-range Rydberg molecules made up of a Rydberg atom and one, or more, ground state atoms weakly bound by scattering of the Rydberg electron. The appearance of many-body effects at very high densities, such as the creation of Rydberg polarons, is also being investigated. In other work, electron-molecule collisions at ultra-low electron energies and the properties of heavy-Rydberg ion-pair states are being studied.