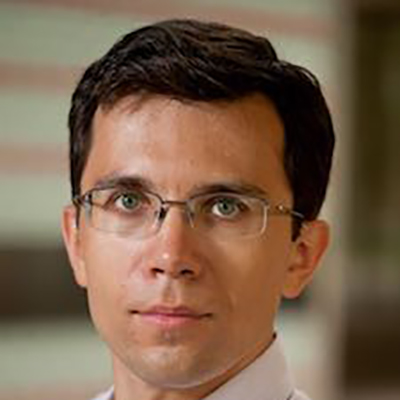 Andriy Nevidomskyy is a theoretical physicist working in the field of condensed matter. The focus of his study are materials in which electrons interact strongly with each other, resulting in a very different behaviour from ordinary metals such as aluminium and copper. One of the examples are the heavy fermion metals, so called because the electrically charged particles of which they consist, the fermions, are unlike ordinary electrons. The reason these electrons are unique, is because the interactions between them are so strong that they acquire a very heavy mass, often several hundred times greater than that of a bare electron. As a result of this heaviness, many material properties are profoundly affected. In particular, the electric current and thermal heat flow differently through these materials at low temperatures. In addition, exotic quantum phases can form from this strange metallic state, such as unconventional superconductivity, that defy theoretical explanation.

The reason why most metals look qualitatively similar at cryogenic temperatures, is because their behavior is dictated by their lightest constituents – the electrons. Electrons obey special rules, and rather than being a gas of particles, they form what is called a Fermi liquid, or a Fermi sea. One can think of the response to an external probe as ripples and waves on the surface of this sea. In ordinary metals, these waves all look almost identical, described by the Landau Fermi liquid theory, which lies at the foundations of the modern theory of metals. The heavy fermion materials are different. They are typically composed of f-electron elements, such as cerium or plutonium, with CeCoIn5, YbRh2Si2, PuCoGa5 as examples. By applying pressure or chemical doping, these materials can be tuned to the so-called quantum phase transition, where a magnetic phase disappears at absolute zero temperature. It is near this special point that the strange metal state is formed and exotic phases, such as superconductivity, emerge.

To study the properties of these phases, Dr Nevidomskyy employs a combination of the realistic electron band theory, which takes into account the details of chemical and structural composition, and the state-of-the-art analytical and numerical techniques to solve the effective many-body problem. The methodologies used include the cluster dynamical mean-field theory (CDMFT), large-N expansion and Schwinger boson techniques. It is hoped that this combined approach will help shed light on the properties of the non-Fermi liquid `strange metal' state and accompanying emergent phenomena, such as the unconventional superconductivity. This research is relevant not only to the heavy fermion materials, but equally to the high-temperature superconductors in the family of cuprates and the recently discovered iron-based compounds.

Dr. Andriy Nevidomskyy is an expert in theoretical condensed matter physics, working in the field of strong electron correlations in quantum materials. The collective behaviour of electrons in such materials often results in the emergence of new exotic quantum phases, such as the unconventional superconducti­vity. Nevidomskyy is working on the heavy fermion materials and a new class of iron-based supercon­duc­tors, and is particularly interested in the novel quantum phases emerging in frustrated magnets. Originally from Ukraine, he received his PhD in physics from Cambridge University in the UK, before moving to Université de Sherbrooke in Canada as a postdoctoral fellow to work on high-temperature cuprate superconductors. Prior to joining Rice in 2010, he was a postdoctoral researcher in the Center for Materials Theory at Rutgers University, conducting research into heavy fermion materials. He is the recipient of the NSF CAREER Award and the Cottrell Scholar Award from Research Corporation for Science Advancement.