< BACK TO PHOTONICS AND PLASMONICS 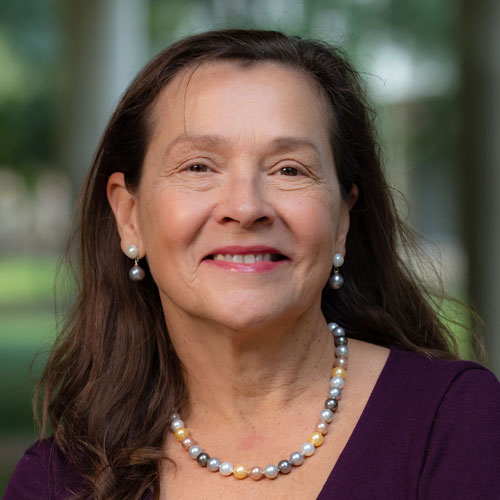 Design and fabrication of optically responsive nanostructures, nanophotonics, plasmonics. Dr. Halas' mission is to create new nanoscale objects that perform a function; to understand the physical properties of those objects, both at the microscopic and macroscopic level; and to incorporate them into unique applications of societal and technological impact.

Naomi J. Halas is the Stanley C. Moore Professor of Electrical and Computer Engineering, with appointments in the Departments of Chemistry, Physics and Astronomy, Biomedical Engineering, and Materials Science and Nanoengineering. She is the Founding Director of the Laboratory for Nanophotonics at Rice University and Director of the Smalley-Curl Institute (formerly Rice Quantum Institute). She received her Ph.D. in physics from Bryn Mawr College, pursuing her thesis research as a graduate fellow at IBM Yorktown. She then served as a postdoctoral associate at AT&T Bell Laboratories, joining the Rice faculty in 1990.

Professor Halas is one of the pioneering researchers in the field of plasmonics, creating the concept of the “tunable plasmon” and inventing a family of nanoparticles with resonances spanning the visible and infrared regions of the spectrum. She pursues fundamental studies of coupled plasmonic systems as well as applications of plasmonics in biomedicine, optoelectronics, chemical sensing, photocatalysis, and most recently in solar energy, with a novel solar steam technology. She is the author of more than 250 refereed publications, has more than fifteen issued patents, has presented more than 500 invited talks, and has been cited more than 84,000 times (over 60,000 citations and H=123 on Web of Science, over 84,000 citations and H=142 on Google Scholar). She is co-founder of Nanospectra Biosciences, a Houston-based company developing photothermal therapies for cancer and other diseases based on her nanoparticles, currently in multiple clinical trials, and co-founder of Eureka Sun, a startup pursuing commercial applications of solar steam generation.

Halas was elected to the National Academy of Inventors in 2015, the National Academy of Engineering in 2014, the National Academy of Sciences in 2013 and was elected to the American Academy of Arts and Sciences in 2009. She is a recipient of the R.W. Wood Prize from the Optical Society of America and is a recipient of the American Physical Society 2014 Frank Isakson Prize for Optical Effects in Solids. She is a Fellow of seven professional societies: ACS, OSA, APS, SPIE, IEEE, MRS, and the American Association for the Advancement of Science. She has been a National Security Science and Engineering Faculty Fellow of the U.S. Department of Defense and an advisor to the Mathematical and Physical Sciences Directorate of the National Science Foundation. She is a member of the Editorial Advisory Board of Chemical Physics Letters, Materials Horizons, and Laser and Photonics Reviews, and an Associate Editor of Nano Letters. She is a Board Member of The Academy of Medicine, Engineering, Science of Texas.