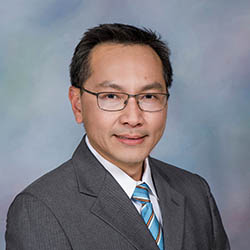 Dr. Michael S. Wong is professor and chair of the Department of Chemical and Biomolecular Engineering at Rice University. He is also professor in the Departments of Chemistry, Civil and Environmental Engineering, and Materials Science and NanoEngineering. He was educated and trained at Caltech, MIT, and UCSB before arriving at Rice in 2001. His research program broadly addresses chemical engineering problems using the tools of materials chemistry, with a particular interest in energy and environmental applications ("catalysis for clean water"). He has received numerous honors, including the MIT TR35 Young Innovator Award, the American Institute of Chemical Engineers (AIChE) Nanoscale Science and Engineering Young Investigator Award, Smithsonian Magazine Young Innovator Award, and the North American Catalysis Society/Southwest Catalysis Society Excellence in Applied Catalysis Award. He is research thrust leader on multifunctional nanomaterials in the NSF-funded NEWT (Nanotechnology Enabled Water Treatment) Engineering Research Center. He is chair of the ACS Division of Catalysis Science and Technology (CATL), and serves on the Applied Catalysis B: Environmental editorial board. Previous experiences include chairmanship of the AIChE Nanoscale Science and Engineering Forum and Chemistry of Materials editorial board membership.